John Matthews | The Controversial 6 of Stones

THE CONTROVERSIAL SIX OF STONES 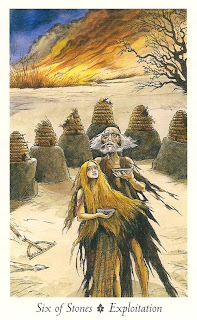 This has been consistently seen as a controversial card. Because the 6 of Discs is generally associated with plenty, why does the 6 of Stones in the Wildwood Tarot show two people begging for a crust in a desolate and fire-riven wilderness? The answer is really quite simple. This card is not just about acquiring vast wealth and plenty – it’s about what we do with it. In the current climate it seems scarcely necessary to mention that we squander it. Just as the banks have taken our money and played games of chance with it that have left hundreds of people and businesses (not to mention whole countries) bankrupt; so there are countless examples in the world of people and institutions squandering the riches given us by the earth.

Read some more!
at 13:03 3 comments
Email ThisBlogThis!Share to TwitterShare to FacebookShare to Pinterest