THE STORY OF STRENGTH AND JUSTICE 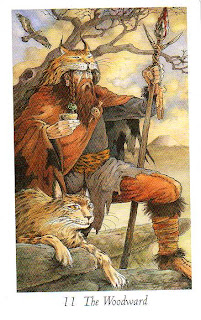 One or two people have been asking why we chose to adopt the older ordering of the Major Arcana in the Wildwood Tarot, specifically in the placing of the Strength and Justice cards. Really this all goes back to good old A.E.Waite, who stamped his presence on so many of the more recent decks. Most modern tarot creators have chosen to follow this ordering of the Arcana, placing Strength at #8 and Justice #11. In fact Waite was much criticised for this, many tarots users feeling he had upset the divine ordering of the cards which had previously followed both a numerical and astrological order. Aleister Crowley, in his Thoth deck, chose to restore the original order – since when individual tarot creators have made their own choice which order the cards would follow.


Before Waite, older decks like the Marseilles, placed Justice at #8 and Strength at #11 and when we worked on the Wildwood we decided to adopt this pattern. So much was arrived at intuitively that it’s very hard to say why. The temptation is to say: “Because we did!”, but in fact this ordering, as with several other factors in the deck actually has more to do with the pattern of the Wheel of the Year than anything else.

Justice, the Stag, shares its position at the spring equinox with the Archer and is associated with sunrise and the element of air. Because for us the Stag represents universal lore and wisdom, where the energy of the universe interacts with our human world, it seemed right for him to be here, overseeing the part of the Wanderer’s journey from the renewed commitment that takes place at the equinox and the deepening of the mysteries that happens when the Hooded Man opens the door into the Great Tree.

This is a turning point in the procession of the seasons and it is here that the judgement of the Stag is needed. In this instance judgement means not only the decisive direction of the Stag to both the Wanderer and to ourselves, but also summons up our own innate judgment, our ability to see beyond the moment and make the right decisions.

The Woodward occupies the place of Strength and oversees the care and maintaining of the Wildwood. His strength is there to support us in our journey from the Wheel at #10 to the challenge of the Mirror at #12. His position is at the point around Lammas when Bows become Vessels, transforming our relationship with the Wildwood and our understanding of the elements of fire and water within us.

Essentially, if you follow the pattern of the Wheel of the Year, you will see how each card opens the way for the next. This has always been one of the strengths of the Tarot, one of its more miraculous insights into the way our own lives are shaped. In the Wildwood Tarot we wanted to follow that pattern as closely as possible, hence our decision to retain this older ordering rather than following Waite’s direction, which almost certainly came out of the ritual patterns established though the magical workings of the Golden Dawn.
copyright, John Matthews - June, 2012
at 16:18
Email ThisBlogThis!Share to TwitterShare to FacebookShare to Pinterest