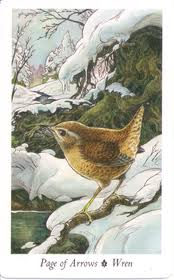 Here are the Wildwood Courts with background on each of the animals. None of these definitions is definitive or exclusive.  We will explore the Courts in a variety of different spreads and practices until you are more familiar with the messages they can give. While there are no reversed meanings given in the Wildwood Book, every card has its own poorly-aspected as well as well-aspected patterns. The surrounding cards will often reveal these different aspects, but I’ve hinted at some of the extreme aspects here. Remember that court cards can represent people and qualities that are beyond age, race or gender.  At the end of the meanings are questions that may be helpful when it comes to reading the card in a spread.  Ask yourself or the querent these questions in relationship to the issue and discover how easy the card is to read!

KING OF ARROWS   -  Kingfisher
The Kingfisher darts over the limpid waters of a river, its colourful plumage a blur as it speeds to its quarry with sharp beak. This bird will only hunt over stretches of river that are clear and unpolluted, for it is discerning. Having sighted and focused on its prey, it will dive blind into the water to retrieve it.  It makes its tunnel nest on vertical banks to give maximum security to its eggs.  The clear waters of this card denote its precise and fastidious nature: it cannot discern food nor will fish or insects inhabit the river if the waters are unclean or muddy.  The trees around the bank are clumps of hazel.

As a person in your life: Articulate and just, this is someone who is a moral leader who upholds standards. Impartiality and justice are his trademark. His knowledge and research is of the highest quality. His highly-principled discernment sees to the heart of things. A  friend who gives you perspective.  Someone who can quantify or assess  a situation precisely. Can be an exacting critic, harsh disciplinarian or corrupt official.


As an aspect or process: Finding a way through chaos by calm clarity. Being watchful.  The need for good counsel. Discerning the truth of a situation.  Finding an impartial standpoint.  Being fair/unfair. An urge to buck the system or weave between the rules.


As an event/happening: Advice or counsel. A court case or dispute needing arbitration. Precise information. A disciplined approach.  Unrelenting, harsh situation.  Ultimate forms of authority that circumscribe your life.


Questions: What must you focus upon clearly? Who can give you good advice? What wise words will help this situation? What is your duty to society?

QUEEN OF ARROWS - Swan
With a look over her shoulder, the Swan glides gracefully down river.  She has a very old fashioned or astute expression that sums you up immediately. Swans mate for life but they renew their courtship each spring in a wonderful dance that culminates in a heart-shape bow as they turn their necks together. Swans are some of the largest wild birds in Britain. The female lays her clutch of eggs in a nest site that is used from year to year.  The Swan is queen of her terrain, loyal and discriminating.


The three plants in the picture: the tall bulrushes, yellow king-cups and willow tree represent some gifts of her personality.  The bulrushes stand proud and tall until the time is right for the male plants to shed their seedhead which explodes in a shower of pollen. The downy fibres can be used to make fire and the pith has been used as rush-lights after being dipped in wax or tallow.  The roots can be used to soothe wounds and sores. The king-cups or marsh marigolds make the ponds and lakes in which they grow full of golden flowers, but the plant can be irritating to the skin if handled.  The willow grows with its roots in the water, but its bark is the basis for pain-relieving aspirin.  This gives us attributes of pride, a little prickliness and a deep concern for pain and its relief.

As a person in your life:  A person of honesty, integrity, and pure focus who is astute and difficult to trick.  A career woman. Direct and sometimes outspoken, s/he can figure out what’s going on quickly. Intelligence and independence bring the ability to overcome events and carry on despite stress. Someone who is undergoing pain or loss.  Someone who speaks out sharply, or who has a razor wit. Can lash out if disappointed or frustrated, have a hypercritical tongue, or harbour resentment.


As an event/happening:  Truth needs to be spoken to avoid misunderstanding.  Setting the ground rules clearly.  Separation, break-up or absence.  Finding freedoms in the midst of restraint.  Ideals turn sour.  Subjection to mind-games or lack of care. Self-reliance brings vulnerability.


Questions: What help do you need to accept or ask for? What straightforward approach is needed here? How do you cut through the tangle?

KNIGHT  Hawk
The Kestrel sits on a high bough of  Scots Pine over the deep valley below.  He is the master of stationary flight, hovering in the thermals in order to strike swiftly at its quarry from a great height. He defends the territory around his nest, though it never builds a nest, merely taking over a suitable receptacle from disused nests of other birds or else using ledges in trees or buildings.  The Scots Pine is the oldest native pine tree in Britain.  The oil that it yields can treat arthritic and circulatory problems, as well as being antiseptic, while its fresh odour sweetens the air with a clean fragrance.

As a person in your life: Knight of Arrows is a champion who rides to defend and uphold beliefs, for himself and on behalf of others.  He has clear views and opinions and makes a good advocate for those who have no voice. He is a friend who is never downhearted but always energetic and spontaneous. He can be someone who gets easily worked up or whose convinced views are insisted upon right or wrong.


As an aspect or process: Vigilance as you go through the process.  Impulsiveness.  Heroism.   Struggling with ideological  compliance or revolt.   Using subtlety as a way through . Holding a grudge.  Festering anger.


As an event/happening:  A cause that you espouse.  A speedy turn of events.  A decision that needs to be made.   A meeting of like-minded people.  A revolutionary inspiration.  A violent kick-back or reaction.  An ideological persecution.


Questions: In the depths of doubt, what do you hold to strongly? What do you need to stand up for? Where might you be wrongly informed? Where is discretion necessary?

PAGE        Wren
The Wren perches on a bare branch as the snows of winter melt in the early Spring. It may be one of the smallest birds in Britain, but it nearly the loudest in its song which ranges between a rhythmic churring and piercing whistle. It builds a round, cave-like nest in order to attract a female, who will show her commitment by lining it with greenery and laying her eggs within.  The wren is known as the King of All Birds in British and Irish lore because, in a contest to see which of the birds could fly highest, the wren ascended through the air on the eagle’s back before flying higher and claiming the title.


At midwinter, in Ireland and South Wales, the wren  as the representative of the old year, was hunted and slain, then carried round in a cage by its entourage of the Wren Boys, who went from house to house singing its praises. The Wren’s size and fearlessness make it a covert messenger.  The snow-covered trees  are beech.

As a person in your life: The Page of Arrows is a good companion to see you through trials and challenges, because he doesn’t easily give up. He is known as an observant overseer whose honesty is valued, but he could equally turn those skills to spying to curious snooping. He learns things easily because of his eye for detail. He is dextrous and cunning in a tight place. Some find him precocious or touchy. He could also be someone in trouble with the law, or living under the cloud of shame or disadvantage.


As an aspect or process: Having fortitude through difficulties.  Daring and agility.  Determination. Thinking the  whole plan through.  Sitting on the fence.  Delaying through fear of awakening old hurts.


As an event/happening:  A new skill or idea. Challenges, negotiations or contracts that need close attention. Examinations,  auditions, tests.  Gossip. A mystery  to unfold.
Questions: How can you engage flexibly with the situation?   What gives you the necessary bravado to face this challenge?  What do need to learn to overcome? What is the mystery at the heart of the matter?


copyright: Caitlín Matthews 2011
at 14:27
Email ThisBlogThis!Share to TwitterShare to FacebookShare to Pinterest