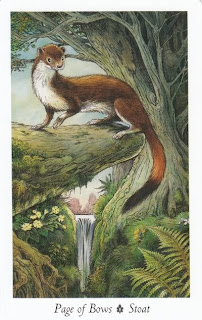 In this second blog post exploring the four suits of the Wildwood, we explore.....


KING OF BOWS      Adder
The entwined adders upon the sun-warmed rocks are striving for dominance. When they mate, this entwining dance covers a wide area of ground. Adders are the only venomous snakes in Britain, but people are rarely bitten by them as sudden movement or vibration causes them to move away. After basking in the open sun, the adder will usually lie curled upon the ground in grass or heathland.  Each adder’s skin is distinctively unique, just as much as any human’s fingerprints are unique to the individual. Out of the rocks grows thrift, a plant with antibiotic qualities.

As a person in your life: The King of Bows is an honourable and magnanimous person, someone who stands out from the crowd in an often dramatic or commanding way.  He sets his distinctive and creative stamp on everything.  He has a strong self-respect and has a flare for establishing a presence, so he is often a market-leader or an entrepreneur. This is a friend who can take charge when no clear leader is present, or a partner who is charismaticly attractive.  Can also be someone who shirks away from positions of leadership, or who needs to brand everything with their mark, whether they originated the work or not.


As an aspect or process: Being benevolent. Establishing your sovereignty or position.  Being assertive or enthusiastic. Dominating the situation.  Bullying others.  Self-righteousness.


As an event/happening:  An opportunity or reachable goal.  An enterprise to be developed. Copyright or intellectual property dispute.  An aggressive take-over bid.
Questions: Where do you need to take charge? Where is your enthusiasm leading you? What helps bolster your self-esteem? What is being demanded of you?

QUEEN OF BOWS  Hare
The Hare stands on alert under a full moon, her ears cocked for any sound or movement.  The only native hare in Britain is the Mountain Hare, which turns white in the winter. Brown hares came from Europe and the female Brown Hare is the one who boxes in the fields at Spring (see 2 Stones for this display) to show potential mates that she is not available or else to test his strength and stamina by a direct challenge. Beneath her feet is the mask of a Green Man, for she is the epitomy of wildness.  Hares have a rich mythology throughout Europe, as the magic shapeshifter and as Eostre the Saxon Goddess who brings the Spring. Both flowers and berries of the elder are used as food and medicine.

As a person in your life: Queen of Bows is a popular and dedicated person, someone who has self-assurance in bagfuls.  She has both passion and wholehearted enthusiasm for whatever she does.  As a friend, she is committed and kind, quick to defend or take your side in any eventuality. Her outgoing warmth summons up the strength to get things started. Can be unpredictable and retaliatory if she is crossed.  Jealousy and rivalry soon arise if the drama queen isn’t placated.


As an aspect or process: Having sympathy and empathy with the process.   Using your ambition creatively.  Courteous understanding.  Harbouring slights or insults.  Undermining the plans of others.


As an event/happening: A party or social gathering. A business opportunity. A peace offering.  Confrontation. Sorcery or petty spell-craft. Burnout.


Questions:  What is the effect of your influence upon those around you?  How can your plans be best fostered now?  Where do you need to be more courteous, kind or understanding?

KNIGHT OF BOWS  Fox
The Fox halts under the oak tree and narrows its eyes in a  look that could denote being very pleased with himself, mischief, or both.  Fox is the native trickster of Britain, a natural survivor and risk-taker in both country and town, which it has colonized to great advantage, where it can easily scavenge from our human leavings rather than always have to hunt. It knows the lie of the land and uses its guile to exploit every opportunity. Behind it is the plant that bears its name, the toxic foxglove, from which the heart-regulatory drug digitalis is derived.   In the foreground is an elder shoot and behind is the native field maple.

As a person in your life: The Knight of Bows is an impulsive and dynamic person whose flamboyant style leads to admiration. He leaps in boldly where others might fear to tread, and is often the fashion-leader or motivator of any group. Can be competitive, a bit of a dabbler or a show-off. As a rebel without a cause, he can also upset and unsettle others, and need constant stimulus.


As an aspect or process: Being quick-witted. Cleverness. Leaving old ways behind. Innovating creatively. Improvising a way forward.  Being over competitive. Recklessness endangers.


As an event/happening: Travel. Impatience. Hastiness. A chance to change things or move away. Plans that quickly flare up only to die back.  Separation by distance.  Gang violence.


Questions: Which opportunity are you seizing in this situation? Where is it leading you? Where do you need to make haste more slowly? What details are you ignoring?


PAGE  OF BOWS    Stoat
Stoat stands on a fern-encrusted stump over a modest stream’s waterfall.  The stoat in its white winter coat is known as the ermine, a beast whose black-tipped pelt is used in royal robes. Stoats are the cheetahs of the mustilidae or weasel family, being able to run down and kill prey ten times their own size. For speed, agility and athletic leaps,  young stoats are unsurpassed.  Their dancing and leaping is a game that helps sharpen their stalking skills.  Behind the Stoat is the aspern tree. Known as the trembling tree, the aspern has been used to treat rheumatic disorders and reduces fevers. Beneath the stoat are the primrose and fern.  Primrose is the harbinger of Spring whose qualities aid against nervous headaches, while its flowers can be made into tea, wine or jam.  The fern is a shady woodland plant that has changed little since pre-history. Myths about fern-seed speak of travel between worlds and the ability to be invisible.

As a person in your life: The Page of Bows is a charming and adventurous person who often acts as an emissary or ambassador.  Ardent for opportunity, he can sometimes be over-zealous.  As a stranger who moves through your life, he may act as a catalyst for change and improvement. As a friend, it can be someone who represents your interests as a go-between. Can also be hasty, gullible and a copycat.


As an aspect or process: Working your way up the ladder. Learning to engage with life. Devotion to an interest or hobby.  Jumping into the thick of things.  Being indiscriminate.


As an event/happening: Unexpected news. Sudden help out of the blue.  Something extraordinary. An opening where you can shine.  A dream or vision. Strange or unsettling news.


Questions:  Who is offering you an opportunity?  What is the advantage of staying where you are? How would things change if you engaged with this? What demands your attention urgently?


copyright: Caitlín Matthews 2011
at 21:00
Email ThisBlogThis!Share to TwitterShare to FacebookShare to Pinterest